Cutting Tapered Slate For a Turret 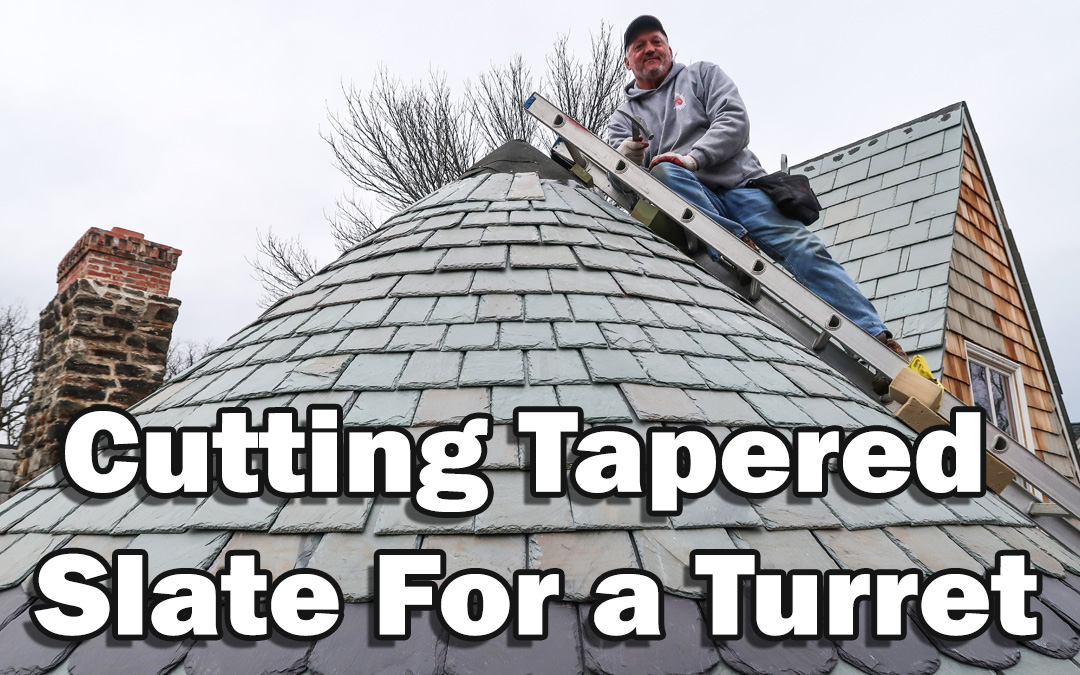 There are different methods of slating a turret. The following is a graduated slate roof with slate on the same course having the same width.

Rafters are chosen carefully (no bows or warping), cross-blocking between rafters is cut with precise angles on the ends with the radius of the turret cut on the outer edge, and sheathing is run from the base to the peak. These boards may be 10” at the base, running to 0” at the peak-whatever the radius permits. They should be installed so any cupping that occurs is towards the inside of the turret, and well-nailed. I prefer to double the ice-and-water-shield, then layer with 30# felt. The felt shows a good chalk line and prevents the slate from sticking to the underlayment, while the underlayment helps with wind-driven rain. There was plenty of space for air to enter the rafter bays at the eave level and a vent on the copper cap to allow an air-flow.

The final preparation is a big spike in the top of the turret. This should be very secure, stand up straight and allowing free movement to your chalk line, which of course is attached to it.

Now to the slate. By nothing better than trial and error, the size of the backer slate can be chosen. Whatever fits well. Smaller slate always fit better, but it depends what look you’re after. In my case I found an 10”x10” slate (10” up the roof, 10” along the eave line) seated comfortably, after being “shouldered” (shouldering is when you clip the top corners of a slate so that it seats better on an uneven or curved roof surface). On most turrets, every slate is going to be shouldered. Assuming the slope of the roof is a straight line, a chalk line snapped from the peak to either side of the backer slate gives you a lot of information. In fact, this triangle can be transferred to a piece of plywood and the template formed gives you all your slate sizes, and most important, the taper.

Lay your slate on the plywood, flush to the bottom edge and mark the back of your slate along either side of the plywood. Mine was an 18” x 10” slate, 10” on the bottom edge and 8 ½” on the top. Each side tapered by ¾”. The second course (lay another slate 7 ½” higher than the base line and mark it off as before) was 9 ½” on the bottom and 8” at the top. And there is your pattern. Successive courses are ½” narrower but of course have the same taper. You can use the template to plan out every course.
Now to the machine.

The slate cutter is a must for turrets. God bless those who cut every slate by hand. I applaud them. I also think they’re idiots. This machine does a better and by far quicker job!

Essentially it can be thought of as a wood table saw. I advise extending the guide if you are cutting larger slate, and that a little learning curve is to be expected (break a dozen slate and you’ll get the hang of it). It does not respond to force. Soft hands are required. The results are amazing!

I made two tapered jigs. For the first side, tapering ¾” over 18” of length, which I took from my template. Since the slate are being cut from the back, the second jig requires a 1 ½” taper over 18”. These jigs can be used for any length slate.

For each pass over the slate cutter, I lock the slate into the jig and push both across the table, keeping the jig firmly to the fence. You will quickly learn how to control the slate and make a perfect cut. As you see in the video, having two people on the job, one cutting, one shouldering, makes for some very productive work.

The cutter is great for free-hand work, like cutting scallops. You have only to let the cutter do the work and don’t rush the end of a cut or put sideways pressure on the blade. These are the main causes of breakage.

Back to the roof.

Snap lots of lines from the peak and keep your slate organized, by the course they belong to. Use slightly bigger or smaller slate and spacing to catch up or pull back and keep an eye on the big picture. Scalloped slate look great on a roof, like these Penrhyn slate from North Wales (Via New England Slate). There’s all kinds of fun to be had.

If you are losing a half inch of slate per course, due to the taper, then you can only go so far before side-lap becomes an issue. I did three courses cut from 18”x 10” slate, three from 16” x 9”slate, four from 14”x 7”slate, reducing the exposure as I went up the roof. I went as far as 5 ½”-inch slate, giving a side-lap of a little over 2”. The pitch is 16:12. I reduced the exposure of the last course and flashed it in with copper. Now I could start over, with a 10” slate. The taper had to be recalculated-it was a lot bigger, and the slate width decreased by an inch each course.

This got me close enough to the peak that I could finish with a copper cap. This was cleated and riveted.

A very tedious but rewarding job. The slate cutter made the difference.