Stay Up To Date With Slate 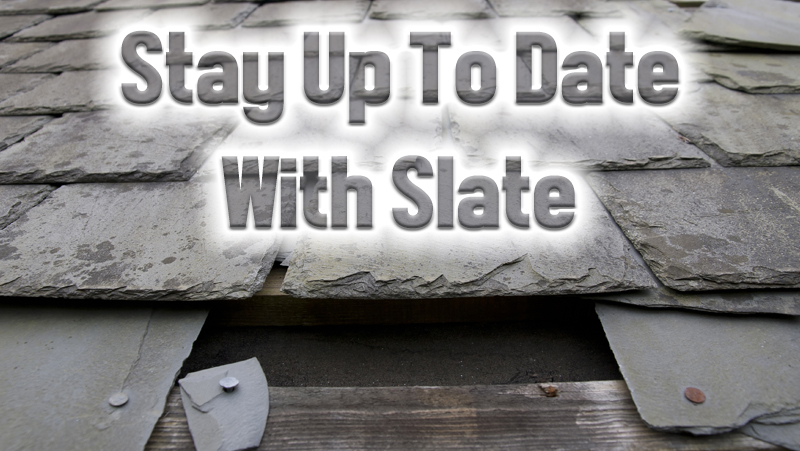 An elder couple walked into Stortz Tools yesterday looking to buy slate tools to repair their 100 year old slate roof in Wilmington, Delaware. The man was physically fit, and the woman had an expensive camera hanging from her neck. We talked a bit about their project and their goal was to preserve the historical nature of their 100+ year old home. I could sense the feeling of pride as they asked details about each tool they would be needing for the repair.

I share this story because this scenario is happening infrequently. Typically, a homeowner would contact a “roofer” if their home needed a slate repair. Said roofer would then explain, incorrectly, to the homeowner that slate isn’t available any longer and that a re-roof with asphalt shingles is the ideal replacement. This is because a roofer will make much more money when comparing an asphalt shingle re-roof vs a slate repair. The homeowner complies and another slate roof hits the graveyard. Why This is Important?

Although unknown at the time, 1902 would prove to be the biggest year for slate shingle production and while over the next 10 years production would rise and fall in response to the market, it would never again reach the heights of 1902. What is the longevity of a piece of slate? Typically, one can expect 75-200+ years from S1 roofing slate. Notice in the graph when most of the slate was produced, add 100 years, and you’ll understand that this is a critical point in the life cycle of slate as repairs are going to start popping up with more frequency. Each time a homeowner moves away from slate, that’s one less slate roof in existence and one more sale for corporate giants. The time is now to make a difference in the preservation of slate.

Who Is The Slate Industry?

Slate is a billion dollar industry in Europe. The European mindset surrounding home ownership is one of longevity. Parents proudly hand down their homes from generation to generation. Having a structure that will withstand centuries is an illustrious goal. Americans used to be built on similar principals that revolved around craftsmanship and hard work. We’ve since moved to making a quick buck and building McMansions. Slate no longer fits in with the American mindset because it’s gritty, tedious, challenging, and time consuming.

Starting with the slate quarries, rock is blasted from the earth. Bulldozers and heavy machinery move the slabs of rock towards production plants. Saws then cut the slab into smaller sections. Workers than hand chisel slate pieces away from these slabs. These slates are then palatalized and shipped all over the country. Distributors sell slate to roofers who then install the slate piece by piece on roofs. It’s an arduous process that yields the finest roofing material mother nature has to offer. We need to come together. Quarriers. Suppliers. Distributors. Contractors. Share information about the benefits of slate. It’s green, durable, fire-resistant, historical, built to last. It’s the roofing material of a society that stands together. Slate shouldn’t be phased out by plastic faux slate and 15 year old asphalt shingles.

What you can do?

This trade is time tested in Europe. By us who understand its value, it’s difficult to see this historical part of our country being uprooted. The Evolution of Power Seamers