Slate Brackets – Qualcraft is the manufacturer of a slate roof bracket which is commonly used for staging a slate roof.  The tongue portion hooks onto a roofing nail (at least a 16 penny nail, 3 1/2″) and then 2 more are then used to secure the bracket.  A lot of weight will be put on these brackets so this securing it properly is essential.  Make sure the lock is engaged!  These brackets allow a 2″x 10″ to be inserted between the brackets and allow access to the roof.  Always secure the plank to the bracket with a nail or screw.  Video provide by Joe Jenkins and the Slate Roof Warehouse. Slator –  The SLATOR (Secure Ladder And Tie Off Responsibly) is a newer product for giving roofers simple and safe access on slate roofs. Unlike a ridge hook, the SLATOR can be used on hip roofs and other places where the ridge is inaccessible. The SLATOR is screwed into the roof rafters with approved fasteners and then a ladder is firmly clamped into the SLATOR. The first SLATOR is generally installed near the eve of a roof. The SLATOR has a built in OSHA compliant anchor point for fall protection. This process can be repeated up the roof as necessary to reach repair areas or to install fall protection for all workers. Stortz Slate Ripper – Once you have the ability to access the roof, it’s time to remove the broken slates.  The ripper is the best way to achieve this.  A thin, strong blade are the desired qualities.  If a ripper is too thick, it can break adjoining slates.  The Stortz ripper is a one piece forging which has superior strength to a welded ripper.  The flex is also important as a rigid blade can do more damage than good.  Once the ripper is slid under the broken slate, the ears hook onto the nail and hammering back on the ripper’s handle will remove the nails to allow the slate to be removed. Slate Hooks – Once a piece of slate has been removed, the most common means of replacing the slate is a slate hook.  A hook is lined up with the course below, and then hammered into the decking.  A new piece is then inserted up into the slate and slid down onto the hook.  Copper and stainless are material options.  Stainless hooks are stronger and will work better for harder decking but the aesthetics of copper may be appealing to some.

Another method for holding replacement slates in place is the nail and bib method.  Most prefer the slate hook method because nails can damage other slate and bibs can fall out or rust.  A slate hook also costs much less than a copper bib. 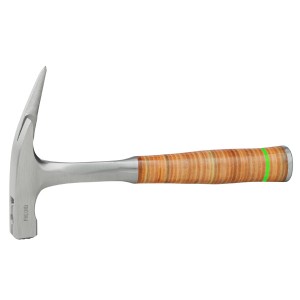 Restoration Hammer – A restoration hammer and a slate hammer are two separate hammers.  A slate hammer is used for cutting, nailing, and hammering nails.  It is useful working in valleys, places where cuts need to be made, and installing new courses of slate.  For repairs, it’s important to carry a restoration hammer.  A heavier hammer is needed for hitting your ripper when removing slate.  You DO NOT want to use your treasured slate hammer.  It doubles for hitting nails and installing slate hooks. Ridge Hook –  If the roof has a ridge, and it’s accessible with a portable ladder, then the ridge hook is the quickest method for reaching a repair area.  Once a ridge hook is secured to a ladder, the ladder is rolled up the roof and then turned over.  The tool “hooks” over the ridge and uses gravity to hold the ladder in position while the user climbs the ladder. Slate Cutter – Sometimes a piece of slate will not be an exact size match for a repair.  A slate cutter is light, transportable, and trims slate to size which makes it essential for repair work.  A cutter can also cut concave and convex cuts for decorative work.  The punch can also be used for nailing purposes.