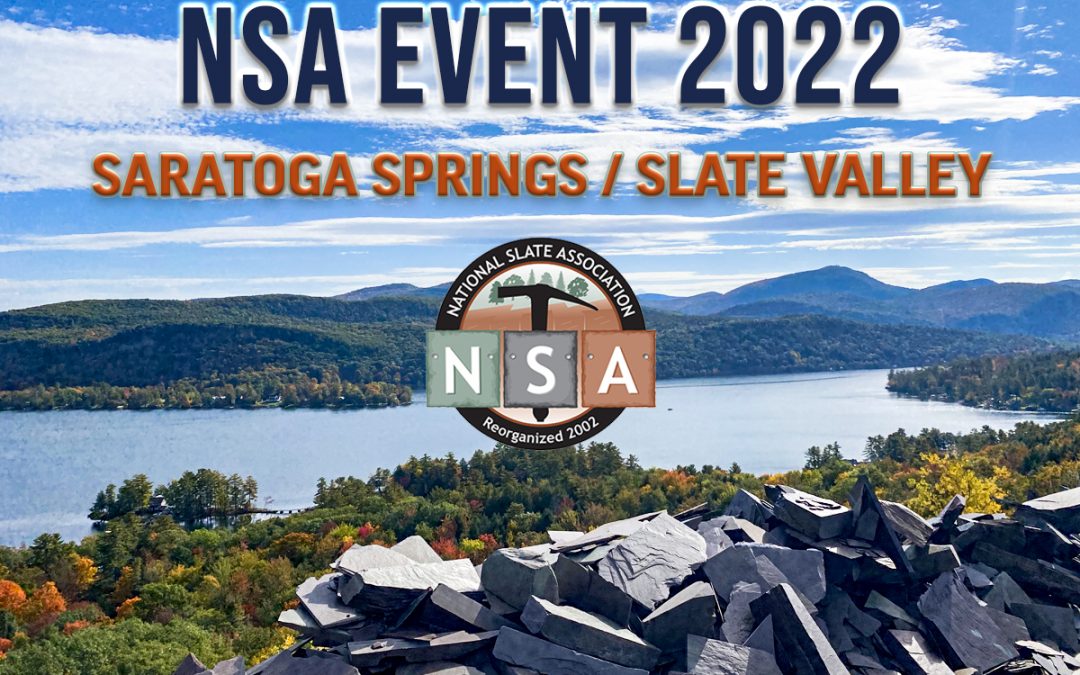 The NSA held its bi-annual conference in Saratoga Springs, NY & the Slate Valley (Granville / Poultney), the first weekend of October which was peak leaf changing season. This conference brings together the quarriers, contractors, consultants, and distributors in one location and was the first in person meeting in years. This was also the 20th year anniversary of the association re-organization that occurred in 2002 in Saratoga Springs.

Guests arrived at the Saratoga Casino Hotel on Thursday night and the group set off to two quarries on Friday morning, Newmont Slate & Rupe Slate. These quarries gave varying perspectives of a larger type operation and one of a smaller scale. Bob Williams of Newmont was excited to show off the new auto-splitter from Europe. This machine takes a block of slate and split it into around 10 uniform pieces. It was also neat to see all of the equipment involved in removing the stone from the ground, hauling it, prepping it, and then cutting it into roofing slate. Down the road, Rupe’s Slate is a long established family business on beautiful ground in Poultney, VT. It is a smaller operation and these guys are experts when it comes to stone while also having an incredible view of Lake St. Catherine.

After the quarry tours, the group headed to the Slate Valley Museum in Granville, NY. The museum offers an excellent timeline on the history of natural slate. Everyone had lunch and listened to a presentation from NRCA’s Jared Ribble on the ProCertification process for natural slate. Procertification is a qualifying exam to create and prove a level of quality expectation out of contractors. Next, Paul Labas the Mayor of Granville, spoke about the state of the quarries and how its been a family oriented industry for decades and it slowly is aging with no clear answer in sight. The day ended with a scenic ride through upstate New York and back at the hotel. The group bar crawled at the end of the night to finish the day with some live music at a local brewery.

The next day started bright and early on Saturday morning with an intro from current President Bob Pringle. Jeff Levine then delivered an update on the standards committee and Tom Stortz spoke on membership and marketing. Jon Hill of Greenstone Slate and Julian Calvo of Be Natural presented on the happenings of quarries domestically and internationally. Trent Cotney was next to give his polished remarks on legal thoughts and then he shared some incredible slate artifacts from his personal collection. Tim Underhill of Delta Slate delivered a remembrance of the life of Pete Papay and Penn Big Bed. The group than thanked Greenstone Slate and North Country slate, as well as all the other pledging companies for the NRCA ProCert before a quick lunch. The afternoon slate began with John Chan of Durable Slate showing some neat projects from around the world and Orion Jenkins of Jenkins Slate Masters recapping his trip to Russia where he took a sheet metal roofing class at the Savros school. Finally, there was a round table discussion headed up by Brian Chalsma of the Roofing Company on fake slate, cladding, and the state of the industry. A wealth of info was discussed throughout the day and was dispensed concisely.

The evening concluded with a dinner cruise around Lake George. This was a time to let loose and talk about future endeavors while enjoying the beautiful lake. It was quite cold!

The conference was a rousing success and we look forward to seeing everyone next year! 5 Tools Your Sheet Metal Roofing Business Should Use